from the New York Times online

Almost 800,000 child seats are being recalled because their harnesses may not hold the child securely, the National Highway Traffic Safety Administration said Monday.

The recall covers a wide range of booster, convertible and infant seats, including some sold as part of a stroller travel system, made by the Dorel Juvenile Group of Columbus, Ind. The action was prompted by the safety agency, which began an investigation of the restraints last year after receiving several consumer complaints that the restraining straps on the seats had loosened. 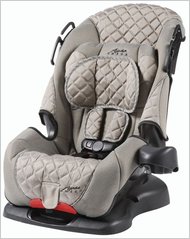 A Safety 1st Alpha Omega convertible car seat, model No. 22469, one of the models affected by the Dorel Juvenile Group recall.

The restraints were sold under the brand names Safety 1st, Maxi-Cosi, Cosco and Eddie Bauer, Julie Vallese, a Dorel spokeswoman, said in a telephone interview. They were manufactured from May 1, 2008, to April 30, 2009. A list of the affected models can be found here.

In a filing with N.H.T.S.A., Dorel said, “There have been no reports of center front adjuster failure in real world crashes, no injuries and no deaths reported to the company.”

Dorel said it had received 143 complaints of the front harness loosening and was conducting the recall even though it feels there was no safety defect. Instead, it told the agency the restraints “exhibited performance issues.”

By BARRY MEIER and JANET ROBERTS of the New York Times Published: August 22, 2011 The federal government has received a surge in complaints in recent months about failed hip replacements, suggesting … END_OF_DOCUMENT_TOKEN_TO_BE_REPLACED

By Moni Basu, CNN William Beach was one of those people who fixated on certain foods. He would eat the same thing voraciously for a few days, and then, when he tired of the same tastes, he moved onto … END_OF_DOCUMENT_TOKEN_TO_BE_REPLACED