by Christopher Jensen of the New York Times 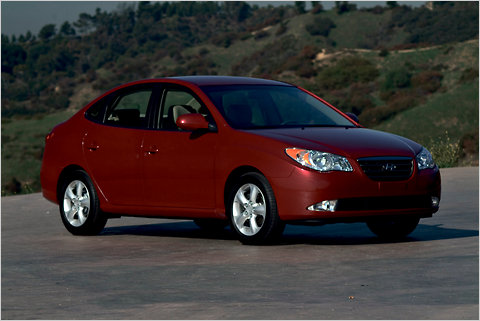 Hyundai is recalling about 285,000 Elantras for air-bag problems, while Continental Tire says about 391,000 of its truck tires are vulnerable to tread separation, according to documents filed this week with the National Highway Traffic Safety Administration.

The Elantras are being recalled in two actions.

The first covers about 96,000 vehicles from the 2007-8 model years due to what the automaker described as electronic noise, which might cause the driver-side air bag to inflate with full force, even if the driver’s seat is sufficiently close to the steering wheel that it should deploy with less energy. The document provided to N.H.T.S.A. did not explain the nature of the electronic noise.

The second Hyundai recall covers about 189,000 Elantras from 2007-9. Hyundai says liquid spilled in the front-console cup holder could leak through and cause an electrical problem. The condition might trigger the deployment of the passenger air bag, even if the occupant weighs so little that the bag should not inflate.

Hyundai said it discovered the problems while answering questions raised by N.H.T.S.A. in an investigation begun earlier this year by the agency.

Continental Tire said it was recalling the truck tires, most of which were original equipment on 2008-9 Ford F-250 and F-350 pickups, after learning of a January 2011 crash that resulted in a death.

Continental said it began monitoring the situation after noticing an increase in warranty and property-damage claims in 2009. In January, Continental was informed of the crash and subsequently “escalated its monitoring efforts,” which led to this week’s recall.

The tiremaker informed the safety agency that the tires might experience uneven wear, vibration or, in the worst case, when they are overloaded or underinflated, a “separation between the belt edges, potentially leading to a tread detachment.”

In other recent actions:

• Honda is recalling about 33,000 Odyssey minivans from the 2011 model year. The automaker learned that when the windshield wipers were frozen to the windshield and the driver attempted to use them, the strain might bend a linkage rod, which could render the wipers inoperable.

• In a separate action, Honda recalled about 18,000 Civics from 2011 because a problem with a plastic casing could allow gasoline to leak in a roll-over accident.

• Jaguar is recalling almost 6,100 XK and XF models from 2010 because the power-assisted steering pipes were not treated properly to prevent corrosion. This could cause leaks over time, leading to the loss of power assist and, possibly, a fire.

• The Blue Bird Corporation is recalling about 13,600 school buses because a warning light may not illuminate when there is a failure of the antilock braking system.

• Heartland Recreational Vehicles is recalling almost 600 of its 2010-11 North Trail Travel Trailers because part of the suspension can hit a propane line, possibly causing a fuel leak and fire.

Hyundai, Continental and Jaguar described their recalls as “voluntary,” but the automakers are obligated under federal regulations to notify the safety agency within five days of discovering a safety problem.

By BARRY MEIER and JANET ROBERTS of the New York Times Published: August 22, 2011 The federal government has received a surge in complaints in recent months about failed hip replacements, suggesting … END_OF_DOCUMENT_TOKEN_TO_BE_REPLACED

By Moni Basu, CNN William Beach was one of those people who fixated on certain foods. He would eat the same thing voraciously for a few days, and then, when he tired of the same tastes, he moved onto … END_OF_DOCUMENT_TOKEN_TO_BE_REPLACED